Our solutions provide the security for:

Read brief description about all products you can find in our catalog.

The concepts, forming the basis of the Stealthphone Tell and Stealthphone solutions, have significant differences in the underlying principles of design and operation, as well as functional capabilities. The main issue is the information security level which users will choose. The higher the security level, the higher the cost of the security means. The selection of the optimal security level is determined by the technical features of the means available to the enemy (e.g. hacker) which he uses to intercept information. It’s enough to use Stealthphone Tell secure network in many cases in order to preserve private information. Low cost of the software, simplicity and ease of use makes it possible for the users who’ve never used them before to quickly adapt to the operation of the Stealthphone Tell secure network.

"MTT" company offers its customers one of the two solutions to solve these problems:

General principles, increasing the credibility of both approaches:

The use of the Stealthphone corporate network, compared to the general secure Stealthphone Tell network, provides new functionality and services, ensuring higher quality of the information security level. It is provided by the use of hardware encryption devices designed by "MTT", which comply with TEMPEST standards. With these devices users can themselves implement encryption and generate keys.

The solution the client selects is based on many factors, including:

and some other factors.

The secure Stealthphone Tell network is an open network designed for the exchange of encrypted information (voice, image, text, data, etc.) between subscribers. It is based on public key distribution and doesn’t require prior key exchange between the subscribers. Its openness means that anyone can join the network. Secure Stealthphone Tell network operates within the Internet.

Anyone who has a smart phone and Internet access can connect to the secure Stealthphone Tell network and become its subscriber. It’s necessary to do the following:

Users can start working after activating the Stealthphone Tell application, which takes just a few minutes.

What can the subscriber of the secure Stealthphone Tell network do?

The following services are available for the subscribers of the secure Stealthphone Tell network:

How does a secure Stealthphone Tell network operate?

Data Transfer in the secure Stealthphone Tell network is implemented via communication servers located in different countries and operating in the Internet. The subscriber must also have access to the Internet in order to use the services of the network.

Data encryption is performed according to the «end-to-end»principle, while such operations as encryption key generation and data encryption are performed by the subscribers themselves. Communication servers are used solely as transit nodes to exchange encrypted information between the network subscribers. Thus, network administrators cannot read the information passing through the server.

The secure Stealthphone Tell network differs from the similar solutions, offered by the competitors, by the use of digital certificates. They enable the implementation of an additional powerful mechanism (along with the mechanisms included in the ZRTP). This mechanism allows both subscribers to identity each other (mutual authentication). Public Key Infrastructure (PKI), with a Certification Center as its core, is implemented and deployed within the secure Stealthphone Tell network.

The advantages of the secure Stealthphone Tell network

The maximum security level of the Stealthphone Tell network was in the focus of attention during the development of that secure network. Along with the standard technologies we have introduced the technologies which greatly enhance the security of this solution: 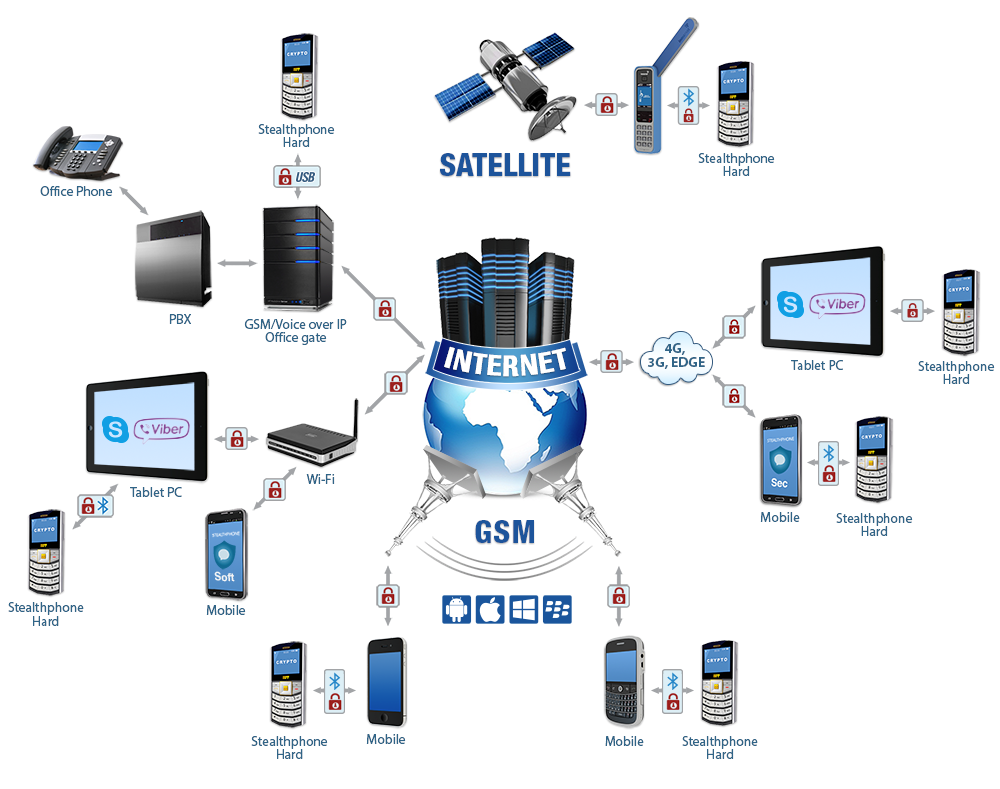 We must recognize the fact that technical means which cybercriminals have at their service, are little inferior in their effectiveness to those used today by security services. Hackers’ fabulous profits play an important role: they’ve already exceeded the profits of drug lords and reached more than $ 400,000,000. Therefore, in the face of increasing multi-faceted information security threats state and private organizations are forced to use complex and multi-layered self-security measures to prevent criminal data breaches.

A bit of history

It is common knowledge that wooden doors were of superior strength in the Middle Ages. As a rule a typical wooden entrance door was made of two layers of oak boards. Wood fibers were arranged vertically in the outer layer and horizontally in the inner layer. As a result it resembled something like simplified plywood. Iron nails joined together two board layers, and the whole construction was reinforced with iron bars. The nails stuck with their spikes outward so that they could damage the weapons of the attackers who tried to break through the door.

Such multilayer protection has been in use since ancient times: even if the enemy broke through the first line of defense, he had to break through several more, suffering heavy casualties.

Stealthphone corporate network employs the same principle. Traditionally the smartphones and computers have in-built security systems. They look convenient, but are these systems really secure? Not always. The criminals try to break through this protection. That’s why we created a unique stand-alone encryption device Stealthphone Hard that secures information in mobile devices and computers. Encryption processes run separately from data transmission. Stealthphone Hard runs its own low-language OS and meets military-grade TEMPEST standard that shields against dangerous side radiation. All this secures your data against almost every kind of cyberattacks.

The network includes a number of dedicated servers that use Internet-channels. Stealthphone network has a state of the art voice encryption feature that supports various channels:

Network is managed by the administrator who is responsible for:

All three components are scalable; they have different features and degree of security, that’s why Stealthphone networks can be customized according to the client’s needs.

Stealthphone corporate network can be used by a small group of individuals, as well as by state organizations and major corporations.

Network administrator is responsible for managing secret keys and logical structure of network.

Network administrator creates and maintains subscriber database and creates groups (overlapping and non-overlapping) of subscribers who can exchange encrypted data with each other.

Corporate network administrator generates and distributes secret pairwise keys for all the subscribers within Stealthphone corporate network. He is also responsible for scheduled and non-scheduled change of keys. He uses software uses Stealthphone key to manage secret keys and logical structure of network.

Communication servers in Stealthphone corporate network use Internet channels. These servers transmit encrypted data (voice, e-mail, short messages, files etc.). The servers do not run any encryption processes, and the network administrators do not have access to unencrypted data.

MTT client can design and deploy (with the help of MTT) their own system of communication servers according to their criteria (data load, network layout, geographical location and other).

To access Stealthphone network services, the subscriber must have subscriber equipment with preloaded secret keys array required for communication with other subscribers.

An individual can use application Stealthphone Soft or hardware encryption device Stealthphone Hard as subscriber equipment. A company must use software-hardware complex Office Gate.

Stealthphone Soft is an application which is compatible with most mobile OS (Android, Windows Phone, iOS, BB). Stealthphone Soft meets all the standards of engineering cryptography. The application is easy to install and user-friendly. Stealthphone Soft allows the users to exchange encrypted data (voice, e-mail, short messages, files etc.) via communication servers of Stealthphone network. Internet connection is required to access network services.

Stealthphone Hard is compatible with almost all mobile devices and computers; it is connected to them via Bluetooth or USB.

The main advantages of the information security system Stealthphone